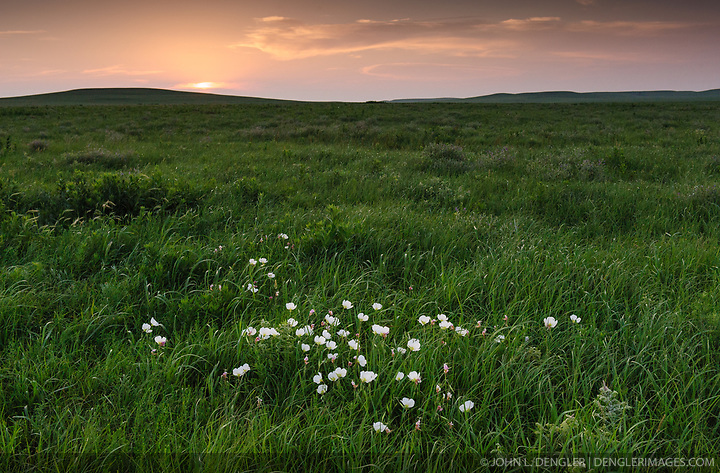 One of the places in the Flint Hills where the prairie is being protected is at the Tallgrass Prairie National Preserve — an innovative public/private partnership with the National Park Service (primary land manager) and The Nature Conservancy (primary land owner). The preserve’s mission is to protect the natural and cultural history of the tallgrass prairie ecosystem — one of the most complicated and diverse ecosystems in the world.

Images from the tallgrass prairie

The Tallgrass Prairie National Preserve is located within close proximity of the Kansas towns of Strong City, Cottonwood Falls, Council Grove, and Emporia and is located on the Flint Hills Scenic Byway – Kansas State Highway 177.

More than 500 species of plants, nearly 150 species of birds, 39 species of reptiles and amphibians and 31 species of mammals make their home in the preserve. In October of 2009, 13 genetically pure bison from Wind Cave National Park in South Dakota were introduced to the preserve. On Mother’s Day 2010 a calf was born and became the first bison born on the property since at least the mid-1800s when the property was fenced for cattle ranching. The preserve plans to add more bison form Wind Cave with a final herd size between 75 and 100 bison. America’s bison once numbered 60 million but were by the end of the 19th century, little more than 1,000 survived. Today the total number of bison in North America is 450,000 including those raised for food.

Most of the remaining tallgrass prairie is located in the Flint Hills because 200-300 million years ago the land was once a shallow sea whose sea floor that eventually turned into limestone and chert (also known as flint). This rock-laden layer of shallow soil was not suitable for plowing. Instead, the land was used and continues to be used to cattle ranching. I found particularly interesting that the cattle in the Flint Hills are referred to as “tourists.” Most of the cattle are shipped to the Flint Hills in the Spring to feast on the prairie grasses for the summer where they can gain up to two pounds a day.

Given that my visit was during the heat and humidity of summer, shooting during sunrise and sunset was as much for practical as photographic reasons — make sure you take plenty of water.

You also want to make sure you give bison, plenty of room as they are unpredictable and can be dangerous. They appear to be peaceful, but their demeanor can change instantly. Bison may look like they would be slow, but in reality they can reach speeds of up to 35 miles per hour and have great agility. In earlier times, bison were feared equally as much as a grizzly bears due to their ability to kill or inflict injury. For my visit I gave them plenty of room, shooting primarily with my 600mm lens.

I was lucky enough to find the herd easily on the vast open space of the preserve. It was even luckier that I was able to photograph the previously mentioned bison calf who was easily identified by it’s temporary light-colored fur. The older bison were shedding their much darker chocolate-colored fur. This shed fur is used by birds for nest building.

The Flint Hill prairies along with the Tallgrass Prairie National Preserve seem to have been good for the local economy. I first visited the area in the mid-1990s. Back then the Chase County towns of Strong City and Cottonwood Falls seemed pretty sleepy. Today, I sensed a resurgence in these communities. For part of the visit, the five-unit Millstream Resort Motel in Cottonwood Falls served as base (no camping at the Tallgrass Prairie National Preserve). It was a charming and restful place. Part of the reason that I only stayed there for part of the visit was, because unbeknownst to me, the Kansas City Symphony was performing out on the prairie nearby and rooms were unavailable for much of my stay. “The Symphony in the Flint Hills” sounds like a pretty incredible experience. Every year a different ranch serves as the host for the one-night event. In 2010 Lyle Lovett performed with the symphony to a crowd of approximately 6,000 who hiked in to the prairie performance site — in a county whose population is only 3,000.

The Flint Hills region is beautiful. I often tell people that in my mind it’s comparable with Alaska. I always get the strangest looks when I describe it that way, but when it comes to big sky panoramas they are much the same. I am looking forward to documenting the prairies of the Flint Hills in the years to come.