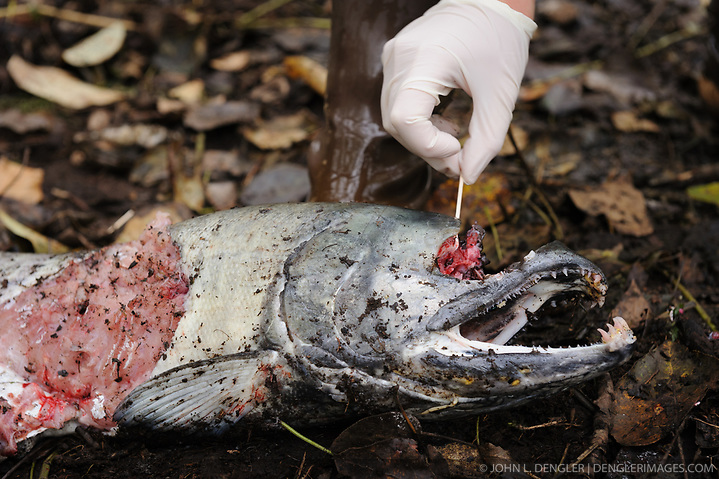 Remember when I photographed the ecologist collecting grizzly bear saliva DNA left on partially-consumed salmon carcasses? Well, Dr. Rachel Wheat recently had her findings from that research project published. Wheat’s research found collecting salivary environmental DNA (eDNA) in this noninvasive manner is effective in results, time in the field and cost over other methods like having to trap a bear. Wheat believes this research will be useful in studying population densities, movement and feeding behavior.

The research and methodology is interesting. Read her paper, Environmental DNA from Residual Saliva for Efficient Noninvasive Genetic Monitoring of Brown Bears (Ursus arctos) for details.

If you missed it, check out my original blog post and photos of her project, Collecting DNA samples from grizzly bear saliva, SAY WHAT?

Sometimes I get pretty odd looks from friends and family when I tell them the places I’m traveling to, or the things I’m going to photograph. The following fits into that category. Roughly, this is how my phone call from Alaska to Carol back home in Missouri went.

ME: (excited) “Remember Rachel Wheat, the ecologist PhD. candidate from the University of California Santa Cruz who I photographed trapping bald eagles to study movement patterns based on salmon availability?”

CAROL: “Sure, I remember her project and the photos you took. Really interesting work, catching the eagles and then tracking where they went with the GPS transmitters.”

ME: “Well, I just found out that as part of her dissertation, she is also collecting DNA from grizzly bears by sampling their saliva.”

ME: (still excited) Yeah, it’s really cool. She’s going to let me document her as she goes about sampling. She samples the saliva left on salmon carcasses that bears have fed on. The technique is pretty much like they do on TV crime shows using cotton swabs. I’ve already been working on a different project on the same creek where she’ll be working. There are carcasses everywhere! The place must be a hornet’s nest of bears based on the fish remains I’ve seen.

CAROL: “Ah, (hesitantly) You be careful. All the dead fish sounds stinky.”

And so I was off once again to document Wheat and her work.

The search for bear drool

My interest in the work of scientists goes back to my time as a photojournalist at the St. Louis Globe-Democrat. Among my favorite assignments were feature stories on research being conducted by biologists, botanists, ecologists, geologists, foresters and conservationists. These assignments invariably led to learning about interesting work in interesting places.

Capturing bald eagles for research on the Chilkat River, Alaska

This has been the case with my documenting Wheat’s work near Haines, Alaska the past two years. As mentioned earlier, I have already photographed Wheat working on one of the cornerstones of her dissertation project, the capturing and tracking bald eagles from the Chilkat River. This past summer she finished the field work for the other two parts of her project. The bear DNA collection is part of her dissertation which looks at how the availability of salmon affects eagle movement, bear activity, and subsistence fishermen.

Finding salmon carcasses was relatively easy for Wheat. It was the middle of September during the fall chum salmon run. Once the salmon spawn, they die. They make for easy pickings for the wildlife that feeds on them. 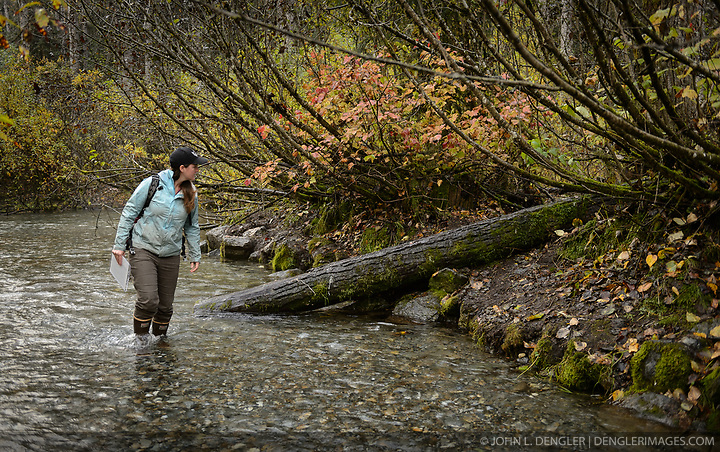 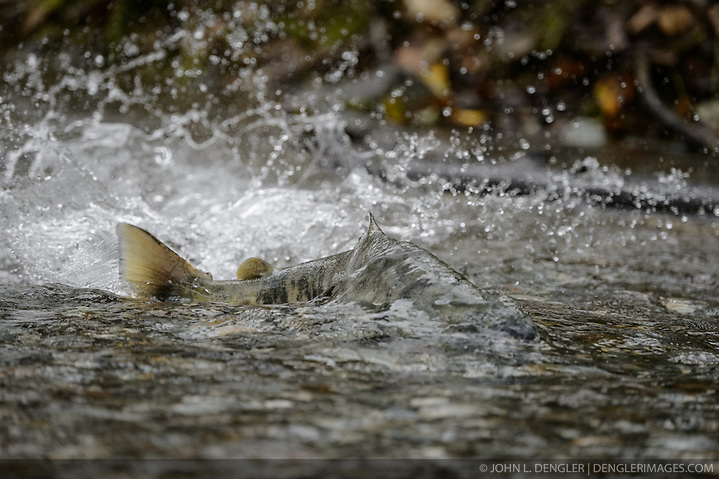 The spawning chum salmon were frantically rushing up the small creek where Wheat was sampling. I couldn’t help but think that the noise of their flapping tails in the shallow water had to be have been heard by the bears in the woods. The night before I met Wheat at the creek an Alaska State Trooper reported seeing seven bears in the area. Luckily, there were no chance encounters with bears but Wheat was prepared for one with an air horn and bear spray within quick reach on her backpack should they become necessary to use. 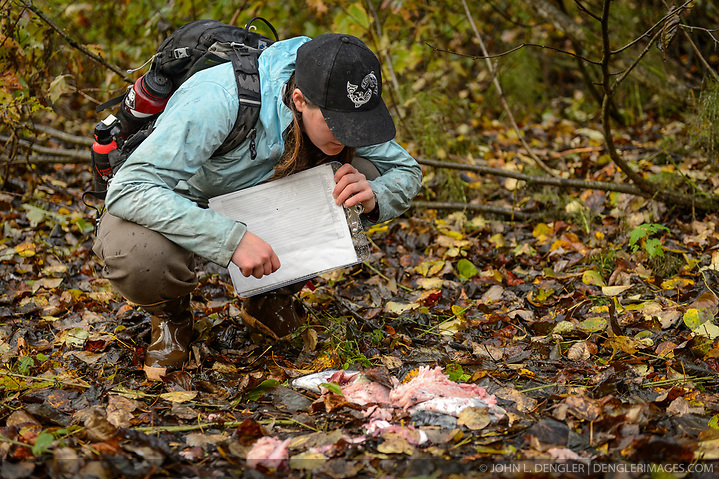 It had been raining and Wheat was concerned about how the rain might affect the quality of today’s samples. Many of the salmon carcasses revealed that the brains of the fish, a tasty favorite of the bears, had been surgically removed and eaten.

Bears aren’t the only ones dining on the salmon remains. So are the eagles. That’s not surprising since the Alaska Chilkat Bald Eagle Preserve includes the creek area where Wheat was sampling. During late fall, bald eagles congregate in the Chilkat Valley to feed on salmon. This gathering of bald eagles is believed to be among the largest gatherings of bald eagles in the world. It is also part of the reason why Wheat chose the Chilkat River eagles to see how the availability of salmon affects eagle movement.

Sampling the salmon for bear saliva is straight out of the tv show, CSI: Las Vegas. Rachel gloves up with latex gloves to avoid contamination, then uses a swab to wipe across areas of a carcass where an animal is likely to have left their drool. Teeth holes are are also poked into with a swab. 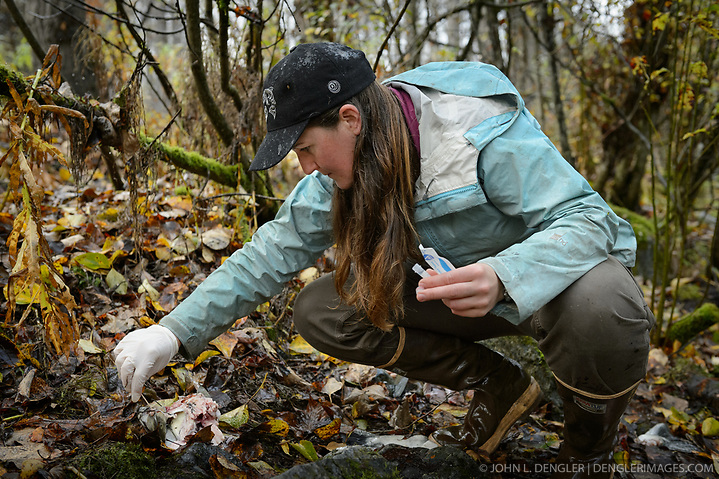 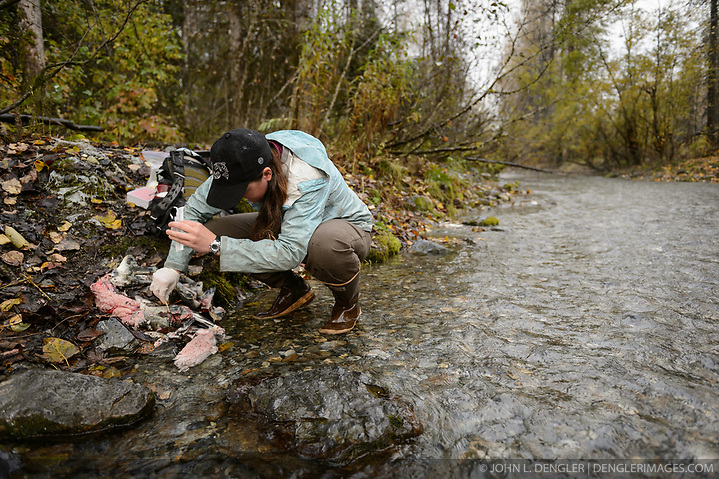 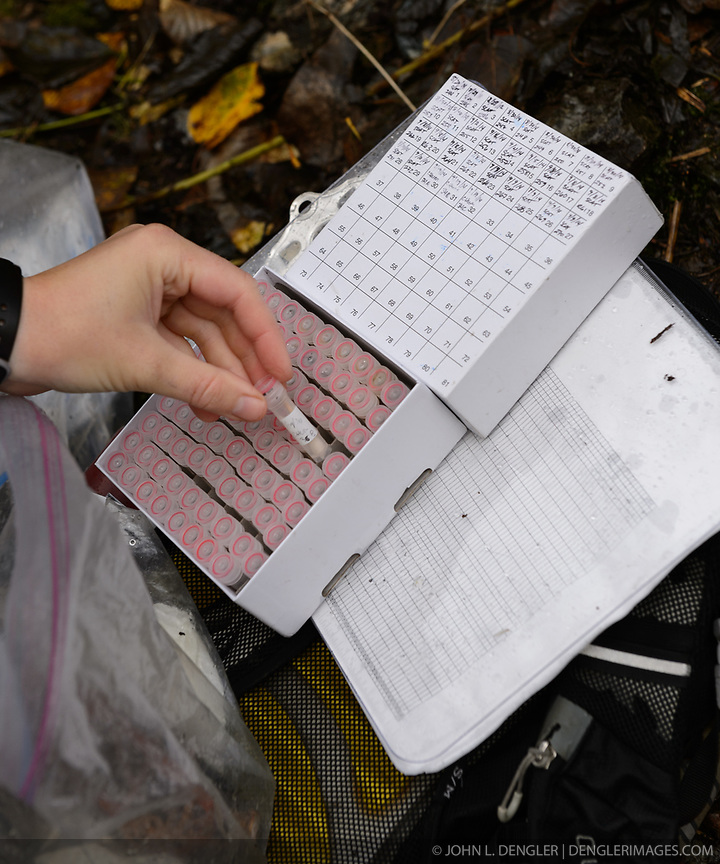 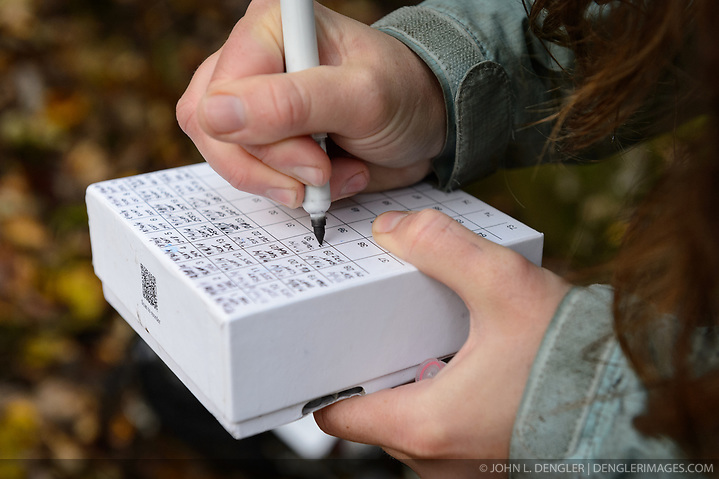 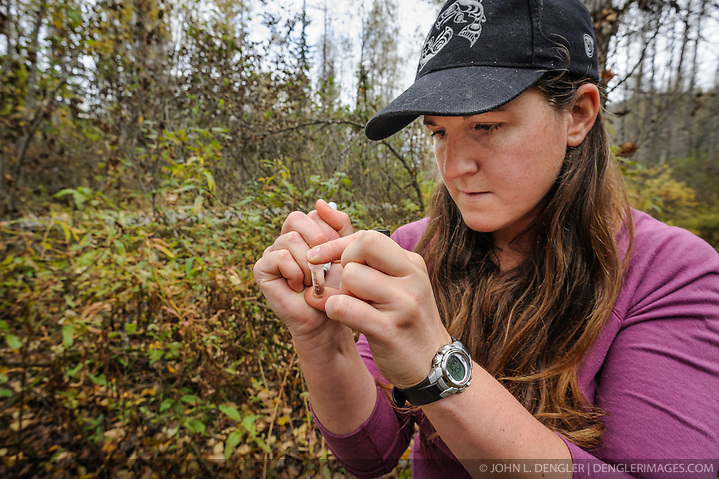 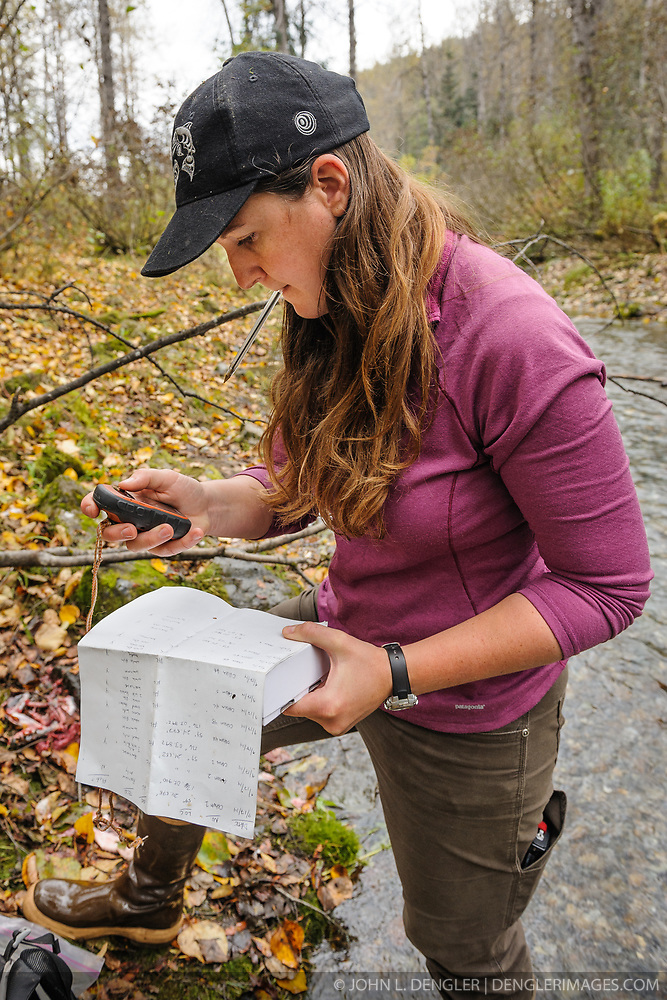 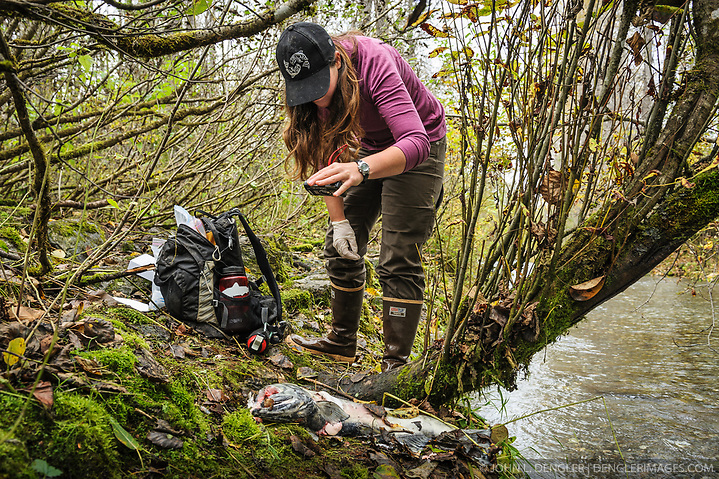 Wheat then snaps off the long wooden stick portion of the sampling stick and places the cotton swab portion in a small vial of sterile solution. She gives the sample a number and records the type of fish. She then takes a photo of the salmon carcass and records its location using a GPS. It’s all typical field work procedures for an ecologist like Wheat. 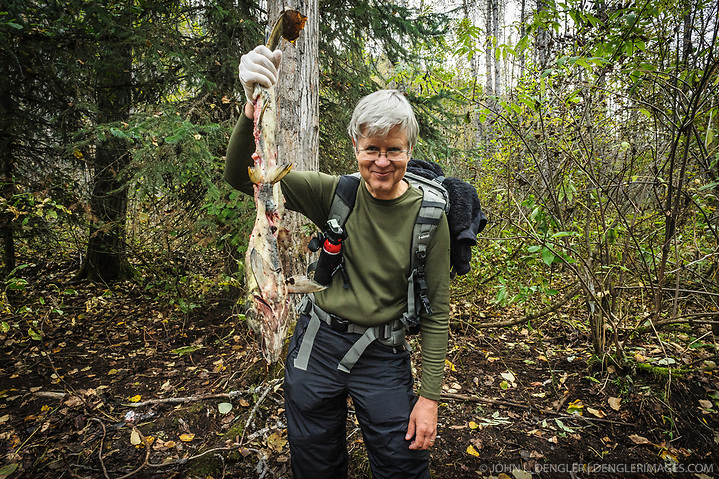 Many of the salmon were pretty disgusting. Some seemed alive with flies and maggots busily working on the remains. With one of the salmon I was asked to help flip the fish so Wheat could sample. It was hard to imagine that what was left was once a salmon.

The smell wasn’t too bad because there was a slight breeze, but you definitely knew you were around rotting fish. Unfortunately I made the mistake of setting my pack on what I thought was a clean spot on the ground. I didn’t make that mistake again as my pack picked up the eau de cologne of rotting salmon. The fact that my pack picked up the fish odor reminded me that salmon don’t just feed bears, eagles and people, but their decaying bodies also add nutrients to the forest floor. As testament to that, salmon DNA can often be found in the trees of Southeast Alaska. What an interesting role that salmon play in the circle of life.

What Wheat hopes to learn from the saliva samples

With the 460 saliva samples collected, Wheat will be collaborating on the DNA analysis with Dr. Taal Levi at Oregon State University. Wheat hopes to determine if partially-consumed salmon carcasses can serve as a viable source for bear DNA to genotype individual bears. She also is looking to determine a minimum population estimate for the number of bears using the Chilkoot Valley and the ratio of males to females, particularly in light of increase human presence.

I asked Wheat about why she feels her research is important to understand the ecological connections between salmon, eagles, bears, and fishermen.

She thoughtfully responded, “Salmon are a critically important component of marine, freshwater, and terrestrial ecosystems; they are a keystone species and the foundation of local and regional economies, and have immense social, political, and ecological value. But there is still a lot we don’t know about the importance of salmon to their ecological communities.”

Wheat elaborated, “Currently, most salmon populations are managed to maximize commercial yield, but that isn’t necessarily the best thing for the long-term viability and stability of the population, or the non-human and non-commercial communities that salmon support. My research, as a whole, looks to address this shortcoming. Salmon support a multimillion dollar industry, but they are also important to subsistence fishermen and wildlife, and my research will hopefully lend support to the argument that salmon management should look toward balancing economic gain with other uses, including ecosystem processes.”

As I have found out this past year on my own personal quest to learn more about salmon, this keystone species truly does play an important link to all forms of life in Southeast Alaska. Wheat’s search for determining this balance seems to be worthy of her hard-work. Like so many things about life on this planet, balance can at times be hard to recognize, and even harder to achieve. 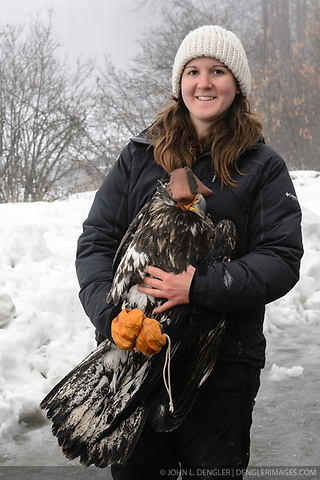 According to the Ecology Alaska website, one of the bald eagle researchers I photographed tagging bald eagles last fall, Rachel Wheat, was recently awarded a prestigious Graduate Research Fellowship from the National Science Foundation. The award will fund her work tagging and tracking bald eagles for the next three years. Congratulations Rachel!

One of the things I thought interesting about her work last year was that she and others on her team funded their research in a novel, non-traditional way through the crowd-funding website, Kickstarter. I thought crowd funding research was an innovative idea when she told me about it. Also somewhat unusual, she and others on the Ecology Alaska team produce a website with detailed field reports on the progress of their research and what it is like doing field research in the wilds of Alaska.

RIGHT: Rachel Wheat, a graduate student at the University of California Santa Cruz, poses for a photo with bald eagle (Haliaeetus leucocephalus) “4P” before releasing the bald eagle back into the wild. Wheat is conducting a migration study of the bald eagles that visit the Chilkat River for her doctoral dissertation. She hopes to learn how closely eagles track salmon availability across time and space. The bald eagles are being tracked using solar-powered GPS satellite transmitters (also known as a PTT – platform transmitter terminal) that attach to the backs of the eagles using a lightweight harness. A handmade leather hood is placed over the bald eagle’s eyes to keep the bird calm. Leather booties cover the bald eagle’s powerful talons to protect researchers during the process of taking measurements and attaching the GPS satellite transmitter.

Continuing with my recent post on bald eagle research being conducted on the Chilkat River in the Alaska Chilkat Bald Eagle Preserve, I thought it would be interesting to show a video clip and photos of an eagle that is part of a different research project.

Research bald eagle number 24 is one of three eagles that are part of the research study being conducted by Steve Lewis of the U.S. Fish and Wildlife Service in Juneau, Alaska. The study is examining the effects of eagle nest removal at the Juneau airport (approximately 95 miles away). Number 24 is one of a pair of bald eagles who were nesting near the pond airstrip where float planes land and take off.

Unlike the eagles I recently photographed that were part of Rachel Wheat‘s study, research bald eagles numbers 24 and 88 have a patagial tag (green wing tag) along with the solar powered GPS tracking satellite transmitter. The transmitter’s antenna can be seen sticking out of the eagle’s feathers to the right of the green patagial tag.