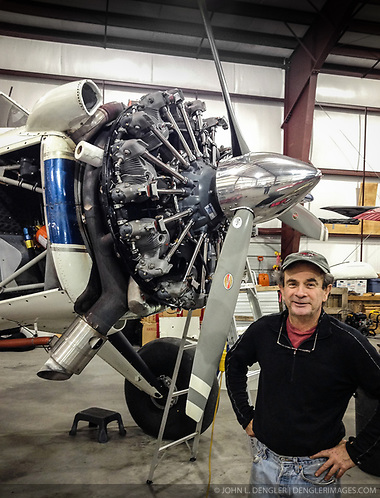 Last week while in Alaska I took a break in my bald eagle photography to drop in on Paul Swanstrom, owner of Mountain Flying Service. Paul is a local pilot who provides air taxi support for mountain climbers, sightseeing flights for tourists or in my case, charter aerial photography support. I found Paul in his hanger tuning up his new plane; a handsome, fully restored and rebuilt, de Havilland Beaver.

This classic Alaska bush plane is a beauty. While his other plane, a sporty Bush Hawk XP, is a great plane for aerial photography, I’m looking forward to shooting from the de Havilland Beaver. The Beaver is much bigger than the Bush Hawk XP and offers easier shooting options for a professional photographer like myself. The Beaver seats seven to eight passengers depending on configuration. It’s powered by a large nine-cylinder Pratt & Whitney 985 supercharged radial engine. I’m always amazed (and glad to see since I fly with Paul) how meticulous Paul is with his planes and engines.

During my visit, Paul showed me some great photos of the Beaver in flight and when Paul was dropping mountain climbers off at a base camp on Mt. Fairweather (15,325 feet, 4,671 meters). Hopefully he will be posting the photos soon on the Mountain Flying Service website.

ABOVE: Paul Swanstrom, pilot and owner of Mountain Flying Service, takes a break from servicing the massive nine-cylinder Pratt & Whitney 985 supercharged radial engine of his de Havilland Beaver to pose for a photo in his hanger in Haines, Alaska. 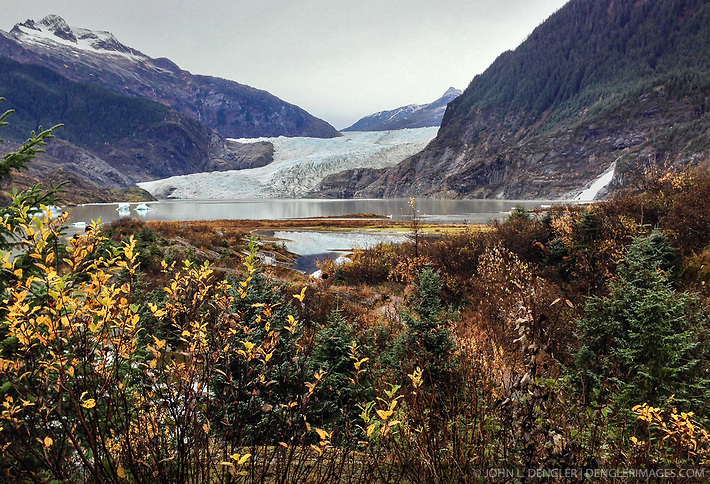 When I start a trip I always feel a bit unsettled, but once I’ve taken a photo or two that somewhat pleases me, I become relaxed and the creative juices start to flow. This “breaking the ice” can never come soon enough.

So on my current trip to film bald eagles on the Chilkat River near Haines, Alaska, the first thing I did upon landing in Juneau was to head to the nearby Mendenhall Glacier to stretch my weary airplane legs and “break the ice” by shooting some still images.

Being one of the most visited tourist attractions in Alaska, the Mendenhall Glacier is a frantic place during the summer cruise ship season. That’s not the case during the fall when you practically have the area to yourself. I headed to the visitor center overlooking Mendenhall Lake and the glacier beyond.

An enthusiastic U.S. Forest Service employee greeted me and asked if I would want her to start up the center’s new film about the nearby icefields and Tongass National Forest. I did and within a few minutes I was joined in the visitor center theater by miniature dinosaurs, dragons, bats, and other little “monsters” who were visiting for a special Halloween weekend of interpretive activities on bats. The costumed kids were just as mesmerized as I was with the sights in the film.

Seeing the film with its excellent photography just made more anxious to get my creative mojo going. Out the door I went and started on the very easy and short “Trail of Time”,

In the past I have never given this trail a thought because visitor center that is next to the trailhead and withall the cruise ship visitors flowing in andout it is a very congested area. . What a mistake, the trail’s interpretive wayside signs talk about the glacier retreat which is evident through the change of rocks, soil, and vegetation as you hike farther from the glacier. You can also see the remains of man’s imprint on the area; such as the rusting pipe that once delivered water to the now long gone Steep Creek Powerhouse. 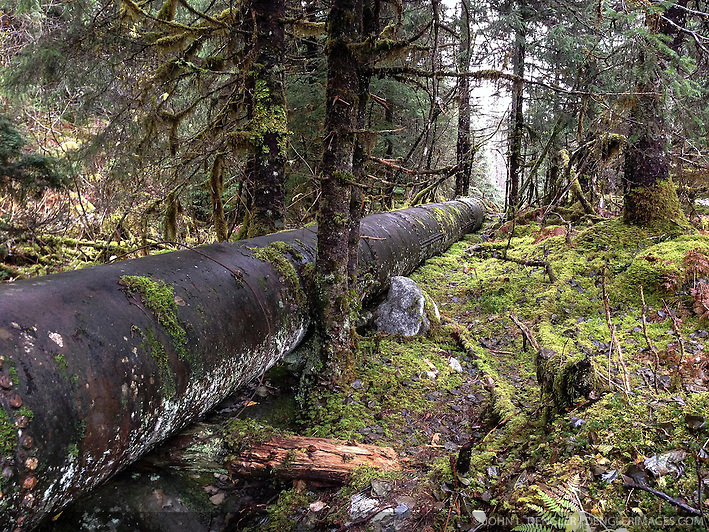 I set off on the trail shooting primarily with my iPhone as most of my 110 pounds of still camera/video equipment was still packed in my air travel shipping cases. That was ok though, as it allowed me shoot fast and effortlessly with the goal of simply seeing creatively.

In past years, when I have arrived in southeast Alaska in late October/early November, it has been snowing with no sign of fall having ever occurred. But this year I was treated to a hint of what fall is like here with a few fall-colored leaves remaining on the trees and shrubs. I have been thinking about returning to southeast Alaska earlier next fall and this taste of fall has solidifying that idea. After the hike it was back to my motel to get ready for my early morning checkin at Auke Bay ferry terminal. When I say early, I mean a very early 3:45 a.m. check-in for the Alaska Marine Highway System ship, the M/V Malaspina; my transportation for the 4.5 hour trip up the Lynn Canal to my final destination of Haines.

The short peaceful hike was all that I needed after my two days of traveling to Juneau. I’m now ready for what I hope will be successful weeks filming bald eagles on the Chilkat River. 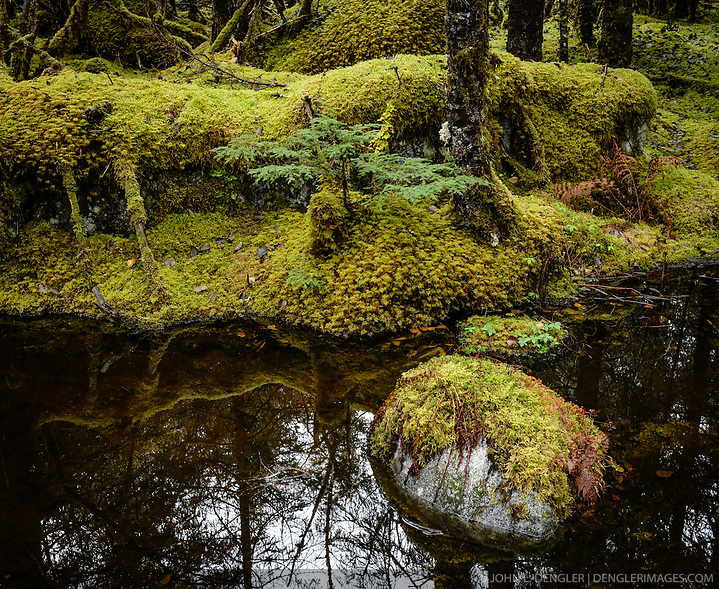 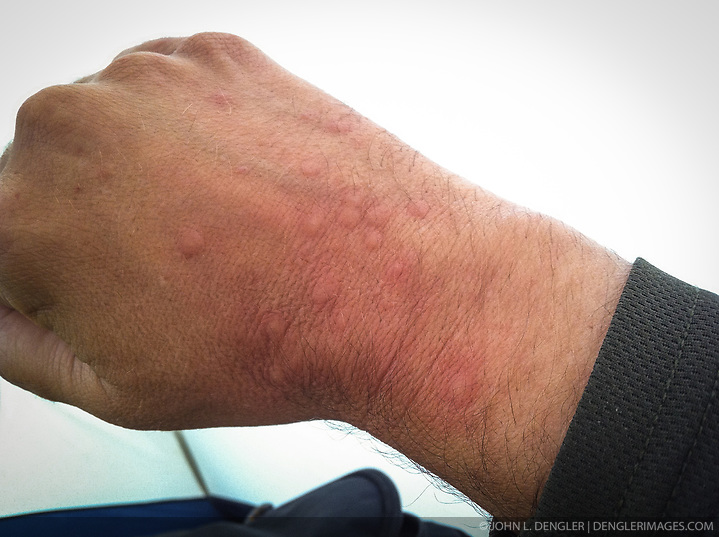 I’m often asked what the mosquitoes are like in Alaska. Well, if you ask someone from Alaska, they are likely to respond somewhat jokingly with “you mean the state bird?”

Honestly, I’ve never found mosquitoes a problem, but then again I’m pretty tolerant of the little vampires, even in mosquito-rich enclaves like the Wonder Lake area of Denali National Park.

My secret is that I simply tell myself that I’m going to encounter them and yes, they may be intense. In other words, I play a mind game on myself. For many reasons I rarely will use mosquito repellant. Among them — I hate the smell, I worry that grizzly bears might be curious about the smell, DEET (which is what you want in your spray) has been linked to causing serious neurological and other health problems, and the repellant melts the fabric and plastic of many forms of outdoor clothing and equipment. In the absolute worse cases I will drag out a head net  For that to happen, the mosquitoes have to be to the point where I’m breathing in mosquitoes with every breath. What you pray for in mosquito-rich areas is for wind. Anything above four miles-per-hour usually grounds the suckers.

Sometimes your hands are both busy and you can’t do anything about it. An example, is the above photo of my hand after a day of hiking in Denali National Park and Preserve. An anti-itch gel or cream like Benadryl (diphenhydramine) will offer some relief.

So how bad have they been? Well, once near Wonder Lake in Denali National Park and Preserve, I slapped the top of my hand to kill the mosquitoes on it. How many did I kill, I counted close to twenty dead on the top of my hand. Yes, TWENTY!

Thank goodness for the buggers though. Wonder Lake is one of the most beautiful places on the planet when the weather is clear and you can view Mt. McKinley, aka Denali. The ravenous mosquito population there, while annoying to park visitors, pollinate the flowers and berries, and are an important link in the food chain.  They also keeps the number of campers down.  Only the hardy are willing to brave their meals with the buzzing and biting, so most vistors to Wonder Lake keep their visit short. I’ve never had a problem getting a spot there — a wondrous place that should easily have a waiting list of hundreds of campers.

ABOVE: Mosquito bites on the back of the hand of John L. Dengler. Photo taken on a backpacking trip near Wonder Lake in Denali National Park and Preserve in Alaska. 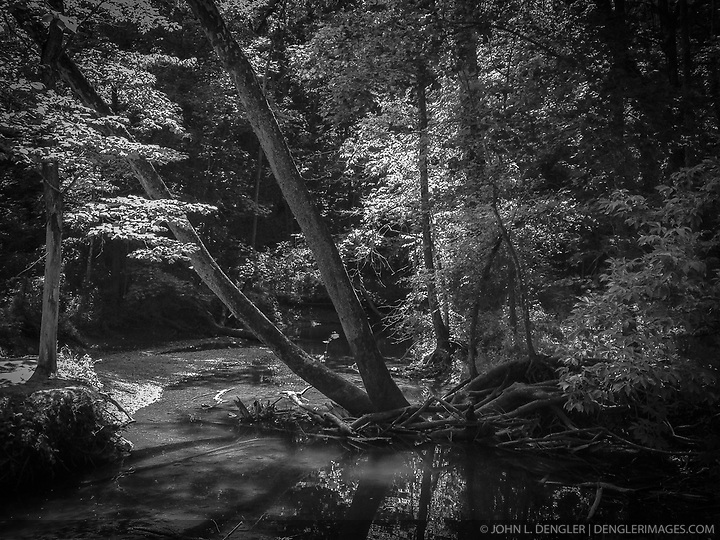 Having an cellphone camera means you always have a camera with you. As the saying goes, the best camera is the camera that you have with you. But knowing that you have the iPhone camera always at your disposal can make you lazy. I sure wish I had my Nikon D4 when I shot the above photo of sunlight filtering through the trees along a creek in Rock Bridge Memorial State Park just outside of Columbia, Mo. The image looks somewhat acceptable on the screen and could make a small print, but that is about it. The bigger problem in my mind, is that the image is shot in jpeg image format, causing the image to lack the tonal range that is possible when shooting with a professional camera in the camera’s native raw image format.

Note to self. Always have the iPhone at the ready, but take the Nikon too. I suspect this will be a lesson that I’m likely to learn several more times before it sinks in. Sigh. …

Sometimes I will convert ‘interior forest’ type of photos into black and white images. I like how the black & white tones simplify the image, while lending a sense of mystery to the forest. Another example of where I have done this is the photo below (shot with my Nikon D3) of an assortment of ferns, including Hapu’u tree ferns, in a small crater in the wet forest near Nahuku (Thurston Lava Tube) at Hawaii Volcanoes National Park on the Big Island of Hawaii. The fern forest photo makes a impressive and stunning large print. 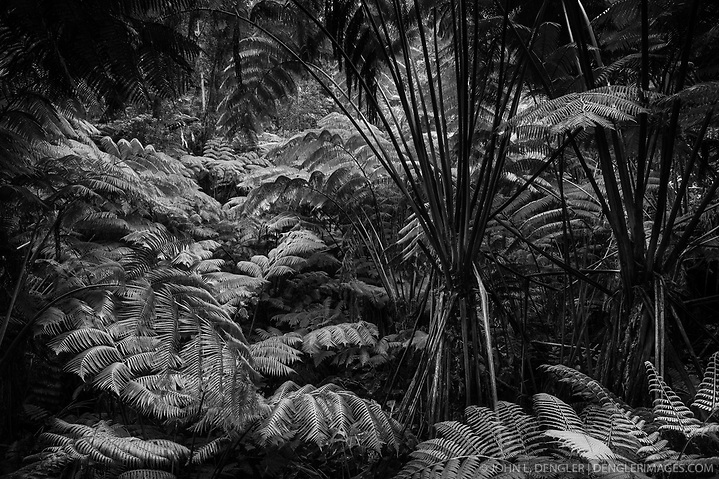 TOP: Sunlight filters through the trees along a creek in Rock Bridge Memorial State Park just outside of Columbia, Mo.

BOTTOM: An assortment of ferns including Hapu’u tree ferns in the wet forest in a small crater near the Thurston Lava Tube (Nahuku) in Hawaii Volcanoes National Park on the Big Island of Hawaii.