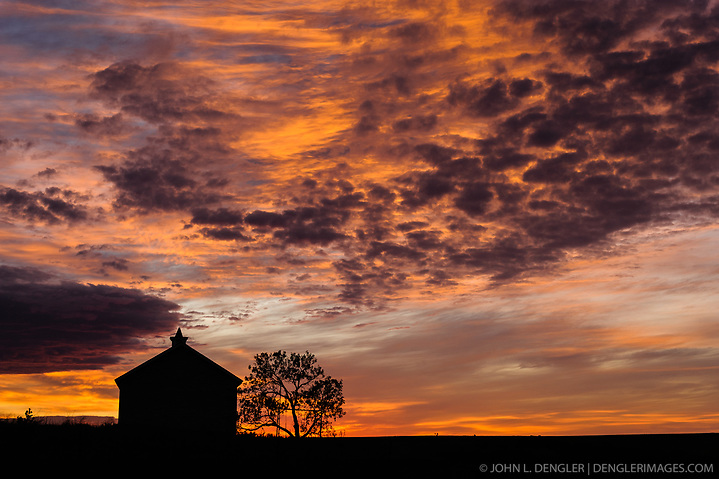 My October visit to the Tallgrass Prairie National Preserve in the Flint Hills of Kansas did not disappoint. The prairie was ablaze in the colors of fall and some of the early dawn skies were spectacular displays of clouds and sky that appeared to be on fire; reminiscent of the flames of the nighttime prescribed burning of the prairie I witnessed in April.

These pre-sunrise displays of color are often referred to by photographers as the golden or magic hour. It’s really not an hour per say and the golden hour also refers to the evening sky just after the sun has set. The moment of optimum color can be a fleeting few seconds or it can last for hours. The key is that if the sun is visible on the horizon in the morning, chances are you have missed the best display and if the sun is still on the horizon in the evening, the best is yet to come. The early dawn photos of the Lower Fox Creek School at the Tallgrass Prairie National Preserve are a prime example.

Images from fall trip to the tallgrass prairie

Spectacular pre-dawn photos come at a price — sleep. If you’re not hiking to your location in the dark (and by dark, I mean having to use headlamps), chances are you’re going to miss the magic light. If the sun is already above the horizon, you might as well go back to bed. On countless mornings I have had to force myself out of the warmth and comfort of my sleeping bag to head out in the darkness and on countless evenings have had to return to camp to make dinner in the dark. On a few occasions when I was car camping I would have to move the entrance barrier to the campground to exit in those early hours. Neighboring campers would wonder if I even existed as I was never seen.

A lot of photography is about luck, and by luck I don’t mean just being lucky. You need to make your luck. Research is probably the most important secret to a good photograph. Knowing when, where, and why will always increase your luck. It’s like buying a thousand lottery tickets instead of just one. To help make my luck I use several iPhone and computer apps that will show me precisely where and when the sun and moon will rise and set, their position through the day for shadows, where the Milky Way will be, and what approaching cloud cover (or lack of) will be. I’ll even use 3D mapping programs with satellite imaging to give me a feel for what I might see.

If you look at the photos in the slideshow, you’ll notice that many of the images might seem redundant. As a stock image photographer, I need to keep the needs of a designer in mind. For example, there are multiple images of the Lower Fox Creek School silhouetted in the pre-dawn light. No, it’s not a case of I can’t make up my mind which photo I like better, but rather there are multiple images to give designers choices. Would a page design work better with the school on the left, or the right? In addition, I’ve left plenty of space for story or cover text. I’ve also included vertical and horizontal options. These examples of shooting with possible design usage in mind are all things that I looked for when I was a magazine art director/designer and bought usage licenses. Here again, I’m making luck that hopefully will result in a licensing sale.

The tallgrass prairie in the Flint Hills takes on a whole new personality in the fall. Grasses and wildflowers turn brown and red after the first chill of fall and the incessant frantic calling of dickcissels are replaced with the quieter chirps of crickets. It’s like the prairie knows that it is time to rest. The tallgrass prairie simply feels calm and quiet, just like the drowsiness a person feels just before falling to sleep. I’m looking forward to traveling back to the Flint Hills in the weeks ahead to walk the sleeping prairie as it is blanketed in snow.