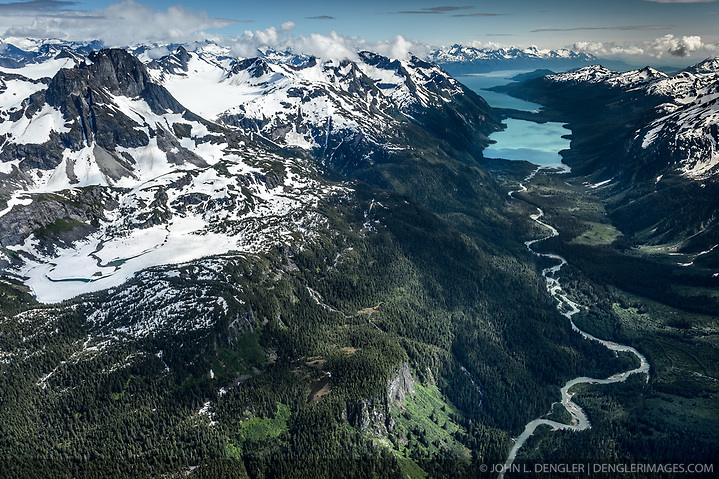 I visit Haines, Alaska several times a year as part of my ongoing project photographing and filming the bald eagles that congregate in the nearby Chilkoot and Chilkat River Valleys each fall. I look forward to my visits for the friendly people and the natural beauty of the area — arguably some of the best any town in Alaska has to offer.

Haines is a a small town (population 2,554) nestled in between the majestic Takhinsha and Takshanuk Mountains and the bountiful salmon-rich ocean waters of the Lynn Canal. Much of the Haines Borough boundary is the mountains that separate it from Glacier Bay National Park and Preserve with its incredible glaciers, and its summer visitors — humpback whales. Abutting Glacier Bay National Park and up the highway from Haines are three more National or Provincial Parks (Wrangell-St. Elias National Park, Kluane National Park (Canada) and Tatshenshini-Alsek Park (Canada). Together they form the one of the largest internationally protected areas on the planet. While challenging to access, that is still quite a backyard to have.

The upper Lynn Canal area of Haines is not just rich in beauty and wildlife but is also rich in resources — rich in minerals and rich in fisheries. Chilkoot River salmon are harvested by commercial fishermen, by sports fishermen, and for subsistence. Salmon play an important role in the area’s economy and lifestyle. The Connelly Lake Hydro Aquatic Studies Report for 2012 prepared by the Shipley Group for Alaska Power and Telephone Company (AP&T) states that according to the Alaska Department of Fish and Game, 41 percent of the sockeye salmon in the upper Lynn Canal come from the Chilkoot River with 25 percent of those salmon spawning in the Chilkoot River drainage above Chilkoot Lake. The value of the fishery is estimated at more than $1,000,000 annually.

So when AP&T, the power company that serves Haines, announced a proposal for a hydroelectric project using a high alpine lake above one of the area’s important salmon spawning rivers, I couldn’t help but wonder how this delicate balance of resources would play out with locals. This curiosity led me to fly above the lake to see for myself.

Connelly Lake (formerly known as Upper Chilkoot Lake) is the focus of a proposed $32 million, 12-megawatt hydroelectric project by AP&T. The power company proposes to build a dam at the outlet of the 90-acre alpine lake that would create a 160-acre reservoir and a 6,200-foot-long penstock down the side of the mountain where water would be delivered to two turbine generators located in a powerhouse near the Chilkoot River into which the lake water would be discharged. Some of the main features of the proposed Connelly Lake project (for example portions of the penstock, the powerhouse, access roads, and the transmission line) would be located in the Alaska Chilkat Bald Eagle Preserve and the Haines State Forest.

Environmental concerns include the impact construction and project operation would have on fish spawning and rearing habitat (water turbidity issues), and bald eagles. Bears and bald eagles rely on the salmon that use the Chilkoot Valley in the fall and early winter when they are attracted to late spawning salmon runs. AP&T wants to build the project to replace an undersea cable that currently supplies Haines with hydro-powered electricity from Skagway. If the cable would ever become unusable, then Haines would need to depend on diesel-generated electricity produced in Haines.

While most Haines residents see clean hydropower as a viable and economical solution to the community’s growing power needs, some feel that it might come at too high a price if the salmon spawning waters of the Chilkoot River are put at risk or even worse, damaged. Others see it as vital if Haines wants to grow. The Connelly Lake hydropower project is still in it’s early stages. How it will play out is unclear.

If you are interested in learning more about the project, the Federal Energy Regulatory Commission posts documents pertaining to the project online. As an example, the Second Six Month Progress Report” from Alaska Power & Telephone Company (26MB download) has quite a bit of research study information regarding the salmon and other fish that inhabit the Chilkoot River. You can find other documents like this by searching the FERC Online eLibrary using the “Full Text Search” feature. Search for “Connelly Lake.”

UPDATE: AP&T announced during the summer of 2013 that it was putting the project on hold citing difficulty securing funding from the Alaska Energy Authority and the lack of community support for the project. Despite these setbacks AP&T says that it not abandoning pursuing the project. In early September 2013, the Haines Borough announced that it was exploring possibly filing for a preliminary permit now that the project was no longer being pursued by AP&T. 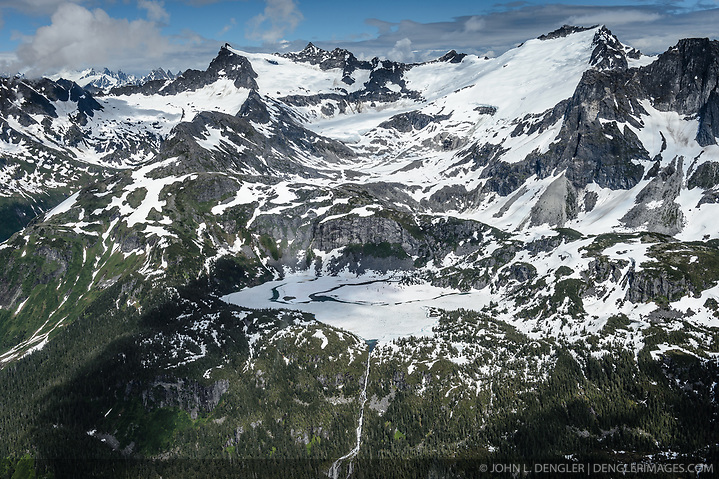 TOP: This photo of the ice and snow covered Connelly Lake (left) was taken in mid-July. Alaska Power and Telephone Company is proposing to dam Connelly Lake and build a powerhouse below the lake near the Chilkoot River (right) in the Alaska Chilkat Bald Eagle Preserve. The Chilkoot River is an important salmon spawning stream supporting bald eagles and bears. The large lake in the background is Chilkoot Lake. Beyond Chilkoot Lake is Lutak Inlet of the Lynn Canal.

ABOVE: The outlet stream of Connelly Lake, Connelly Creek (center), descends 2,138 feet to the floor of the Chilkoot Valley where it joins the Chilkoot River. A 6,200-foot-long penstock would be built down the side of the mountain where water would be delivered to two turbine generators located in a powerhouse near the Chilkoot River into which the lake water would be discharged. Some of the main features of the proposed Connelly Lake hydroelectric project would be located in the Alaska Chilkat Bald Eagle Preserve and the Haines State Forest.

« What’s for lunch? How about dandelions says the black bear
Bald eagle research on the Chilkat River »