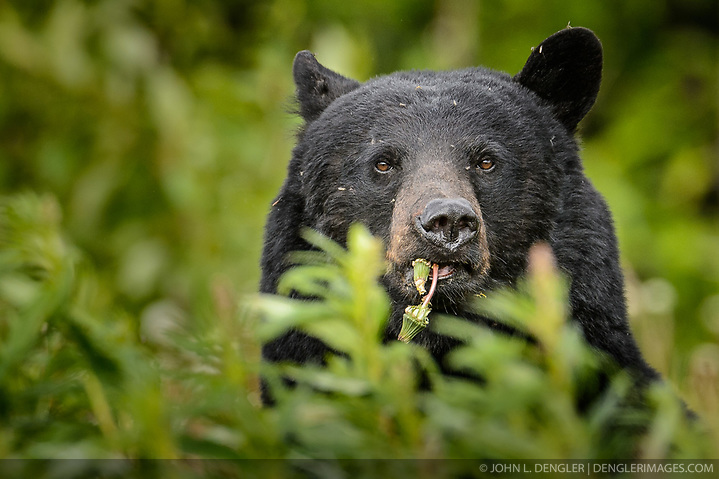 I’m starting to Edit my way through a backlog of images from last summer, in particular images taken in the Yukon and Haines, Alaska areas. I’ll be posting more about these trips in the future. In the meantime, one photo made me laugh as I was quickly looking through the images.

It was this photo of a handsome American black bear (Ursus americanus) that fleetingly made eye contact with me mid-chew while it was eating dandelions. The spot where I photographed the black bear, just outside the boundary of Kluane National Park and Preserve along Yukon Highway 3 in Yukon, Canada, had looked promising for bear photos. Several days earlier I had spotted a grizzly munching lunch in the same dandelion patch. The openness of the patch and accessibility made me think it was a spot worth returning to. I’m glad I did. I watched the black bear eat for close to 40 minutes. I’m certain the bear knew I was watching him through my long 600mm telephoto lens but he ignored my presence for the entire time, except for this one split second when he gave me a glance. He was much more concerned about eating and … taking a nap. During much of this unusually pleasant day, as I spent my time watching, the bear snoozed. Which was something I would have liked to do, but probably not smart idea in bear country. Eventually the black bear woke up and went back to business and munched some more, and in the process, collecting fluffy white dandelion seed pods on his jet black fur.

While most of a black bear’s diet is vegetation, black bears are omnivores; meaning that they eat both plants and animals (grasses, berries, roots, insects, fish and mammals). Black bears typically weight 200 to 600 pounds. Surprisingly, not all black bears are black in color — some are brown, brown or even blond. They are most easily distinguished from grizzly bears by the lack of the pronounced shoulder hump found in a grizzly bear. The black bear is not considered to be a threatened species, though care not to allow them to get human food and garbage is needed to protect them from conflicts with humans.

On all my trips to the far north, the one thing I always wish for is to see bears. I can’t think of a trip when I haven’t seen one, often seeing them everyday while backpacking or sea kayaking. It was another great day. Here are some more images as proof. 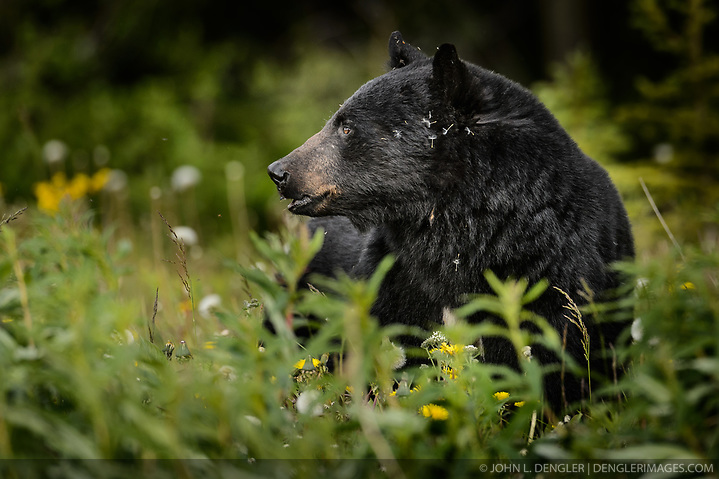 ABOVE: An American black bear (Ursus americanus), eats dandelions just outside the boundary of Kluane National Park and Preserve along Yukon Highway 3, near Gribbles Gulch in the Yukon Territory, Canada. Kluane National Park and Reserve is known for it’s massive mountains, spectacular glacier and icefield landscapes including Canada’s tallest peak, Mount Logan (19,545 ft.). The 5.4 million acre park is also known for it’s wildlife, including grizzly bears, wolves, caribou and Dall sheep. The park is one of a collection of U.S. and Canadian national and provincial parks that form the largest international protected area in the world. Kluane National Park and Reserve was selected as a UNESCO World Heritage Site for being an outstanding wilderness of global significance.