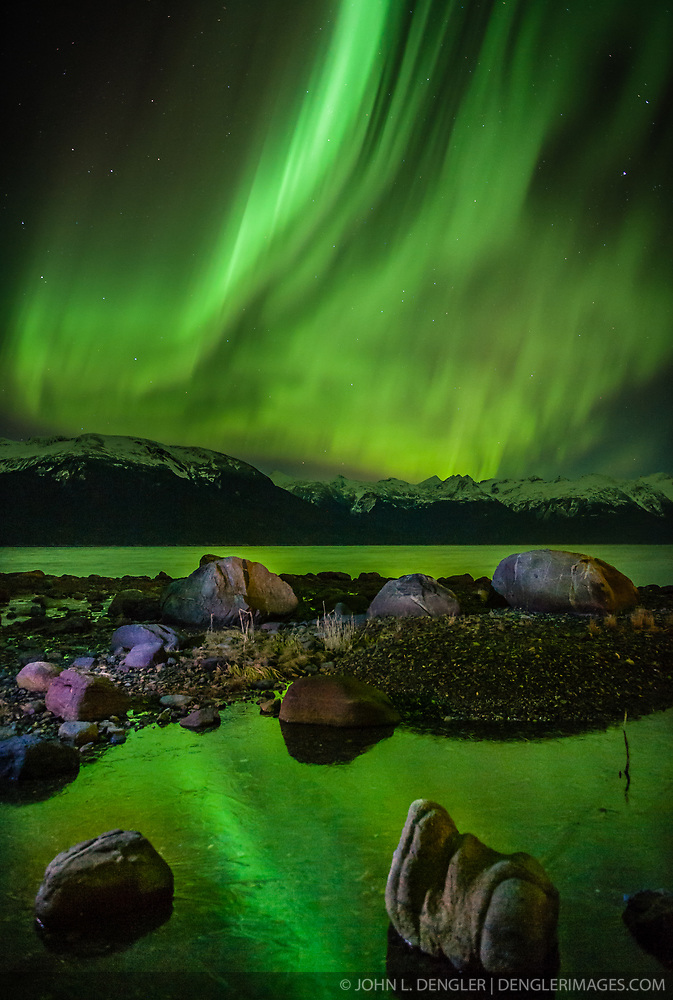 The most spiritual, other-world moment of my life, occurred last November when I witnessed an awe-inspiring display of the aurora borealis (aka northern lights) when I was in Haines, Alaska to film bald eagles.

Those who really know me, know that I’m not a particularly spiritual person. So when I say that I experienced a “spiritual moment,” they know that it had to be something really moving. When I say my jaw dropped, I really mean it.

Photographs, including these, can’t possibly convey what I saw in the darkness the evening of November 8th through the early morning of November 9th, 2013. My photos could have been better, both in terms of content and technique. However, I’m confident in saying that even the best photographer in the world could not convey to others what I saw and experienced during this extended display of the northern lights.

I have struggled with how to explain to friends why I was so moved by this experience. It wasn’t until I started to do some reading about the aurora borealis that I began to realize why it was so amazing to me. It was the size. The biggest thing in the sky  I have seen up to this experience were towering Cumulonimbus thunderhead clouds; frequently seen on the prairie. While tall, at a typical maximum height of roughly 11 miles, a massive thunderhead cloud pales in size to the glowing curtains of the aurora borealis. The BOTTOM edge of an aurora is typically 60 miles high with the TOP edge at an altitude of 120 to 200 miles, though sometimes high altitude aurora can be as high as 350 miles. Add in the fact that the aurora borealis display  I witnessed from my ocean viewpoint was visible overhead from Skagway to Juneau (a distance of 85 miles) and beyond, and you can begin to see why I felt like I was witnessing something from another world. It was incredibly massive. It made our Earth feel very small.

This other-world feeling was genuine and I can understand why our ancestors might have been frightened or thought the aurora borealis was a connection to the spirit world. Throughout the early morning, the curtains of the aurora would fluctuate in shapes and sizes as if they were ghostly spirits trying to communicate with me. At one point two auroral curtains aligned next to each other right above me, stretching from horizon to horizon. The dark area between the two curtains looked like the entire universe above me had cracked, leaving a giant undulating densely black crack that was inviting our earthly world to slip into. I wondered where would end up if it swallowed us. It made the hair on the back of my neck stand on end. 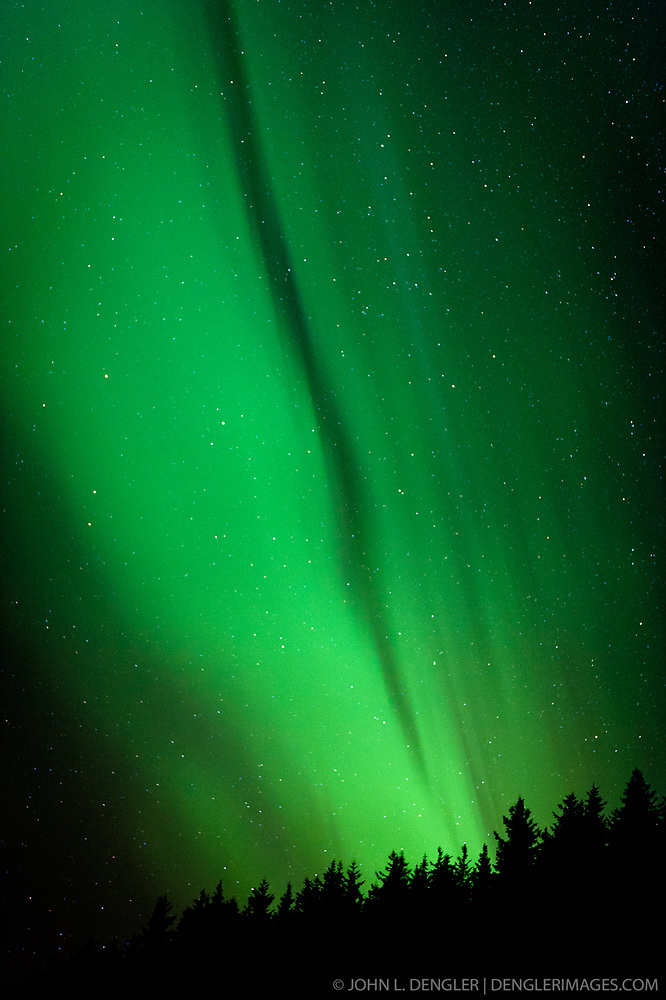 The evening started out like any other during my late fall pilgrimages to Haines, Alaska to photograph and film bald eagles on the Chilkat River. Typically, I would have a quiet dinner with close friends Joanne and Phyllis, owners of the Alaska Guardhouse Bed and Breakfast. This evening however, friends, Tracy, William, John and Margaret joined us. Just as we were finishing dinner, Tracy received a text message from a friend saying that the aurora was out. Seeing the aurora borealis has been a longtime quest for me. Despite having spent extensive time in Alaska, I have never seen the northern lights. It stays too light to see them during the summer months and during the fall and winter the weather is often too cloudy (particularly in southeast Alaska). So when Tracy smiled and silently showed me the text message at the dinner table, I bolted from the table and ran out onto the back porch. There they were, faintly glowing green curtains of light dancing across the cold crystal-clear star-filled night sky.

What happened next was a scene out of an old Keystone Cops silent movie with the photographers in the group fumbling for coats and cameras, piling in the car and speeding to find a spot clear of the town’s lights. We knew we had to act fast. How long an aurora borealis display lasts is fickle. Displays are typically most active in the very early morning hours. The fact that it was only 7:30 p.m. and there was aurora activity should have been a clue to what would come later. However, I was focused on the moment and missed this important clue. After braving the cold wind blowing off the Lynn Canal for about 30 minutes the aurora died down and we left. Over dessert the group excitedly relived what for several of us in the group was a bucket-list event. The next day was going to be another up-before-sunrise morning for most folks so everyone headed to their homes early.

This was the end to an already incredible evening for the group. It would have been the same for me except I was too excited. I sat on my bed in the dark looking through the exposures I took on the glowing LCD screen of my camera. I was fretting that perhaps I might have messed up. It’s not like you get a second chance. I mentioned earlier how the challenges of summer light and how uncooperative weather lessen your chances of seeing the aurora. Equally important, the frequency of the aurora is determined by a predictable solar cycle that ebbs and flows over a 11-year period. Right now we’re at the height of the cycle that is predicted to continue for only a few more years before falling back to minimum activity. To have to wait another decade to have the same frequency of sightings is a long time.

As I was calling it quits for the evening, I peered out the window one last time, as I always do whether sleeping in a tent, or in a B&B bed. It is an a old ritual that has been part of my quest to see the northern lights. While I shouldn’t have been surprised, sure enough, the luminous glow was again appearing in the sky. Not as intense as earlier in the evening, but definitely there. I thought to myself, perhaps I shouldn’t let this opportunity pass. Everyone in the house was sound asleep so I quietly layered-up with clothes, gathered up camera gear and headed out into the cold.

This time I went to a different viewpoint on the ocean, looking in the opposite direction, towards Juneau. While the aurora borealis was faint when I left the house, the sky now has EXPLODED in a massive display of rolling curtains of green light. Oh my goodness, it made the earlier evening display look like nothing. I doubt I will ever see anything this spectacular again. I frantically started out taking photos from the beach high-tide line, but moved quickly into the water of the tide pools to capture the aurora reflection in the intertidal zone and compose boulders in the image foreground to give depth to the image. With the creative juices flowing I then dug out my LED flashlight to supplement my red-filtered headlamp and began painting the rocks with light from the flashlight and headlamp. There I was scurrying about like a crazy madman in the darkness counting out loud the exposure while working my way through the obstacles in the tide pools to paint the boulders. In this case there were the additional challenges of having to keep exposures under 20 seconds to keep the stars sharp (with the lens I was using, the earth’s rotation causes star-trails with longer exposures) and the aurora borealis curtains sharp (if they are moving fast, slow shutter speeds will photograph them with less definition). This meant that I really had to move quickly. I’m really lucky I didn’t break my neck on the slick slimy rocks and boulders in the water. Oh, and did I mention the grizzly bear that has been frequently prowling this beach? I sure didn’t want to meet up with him in the dark. 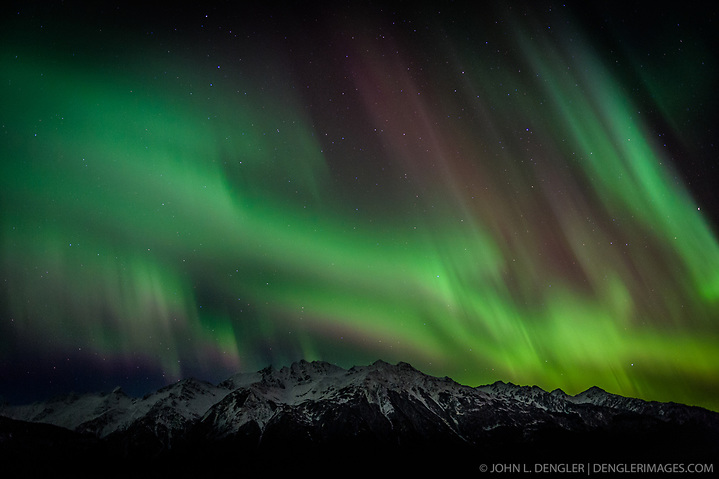 The display continued for several hours. As the aurora borealis curtains became less defined, I decided to head over to the Chilkat Inlet where the Chilkat River flows into the ocean. I’m not as familiar with the road pullouts in that area so it was difficult for me to determine a safe place to pull off on the unlit road but I finally found a spot that seemed safe. Once again, the aurora fired itself up putting on a display above Mount Emmerich and the other peaks in the Chilkat Range, and reaching far up the Chilkat River and Klehini River Valleys, past the border with Canada. While I would have liked to have worked this situation further, the powerful gusty winds that this area is famous for were barreling down the Chilkat River making time exposure photography almost impossible. What looks like fog in the photos is actually flying dust. I finally called it a day at 3:30 a.m.

Physically exhausted and mentally overwhelmed, morning came much too soon. I received some well-deserved good-natured grief from my friend William for not waking him up. In retrospect had I known that what would await me, I would have awakened him and the entire town of Haines!

TOP: A spectacular display of the Aurora Borealis or as it is commonly called, the northern lights, occurred the evening of November 8 through the early morning hours of November 9, 2013 over Sinclair Mountain and other mountains in the Kakuhan Range in Haines. The curtains of light in the upper atmosphere stretched across the skies above the Lynn Canal from Skagway to Juneau. Boulders in the foreground were lit with a flashlight during the four-second exposure.

BOTTOM: The luminous glow of the aurora borealis dances in the upper atmosphere above Mt. Emmerich and other peaks in the Chilkat Range at the Chilkat Inlet for the Chilkat River just outside Haines.