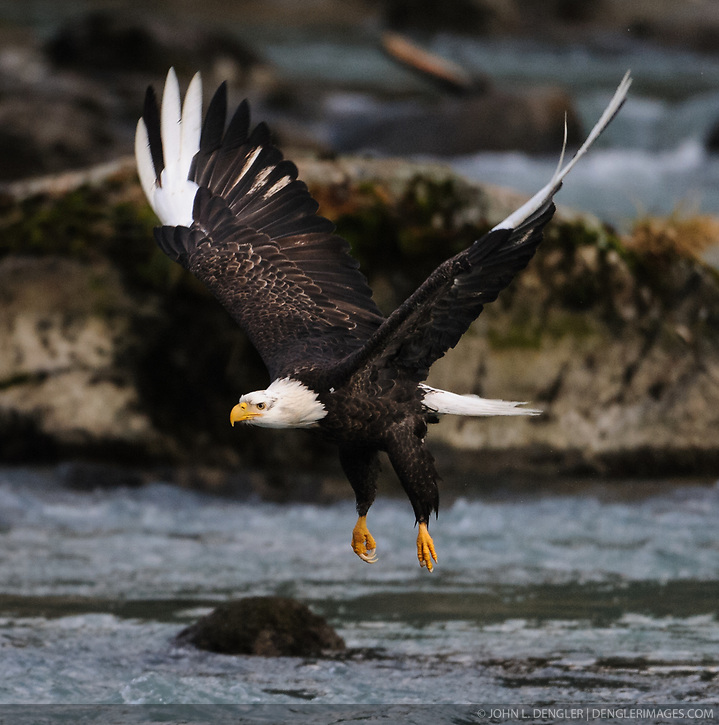 I returned earlier this week from my trip to the Chilkat River in Alaska where I photographed bald eagles. The bald eagles were amazingly plentiful, and for the most part active, though I’m told the numbers were down along with the activity compared to previous years because the river had not been as frozen as it normally would be at this time of the year.

My photography took place in two areas — an area near the Tlingit village of Klukwan on the Chilkat River, and an area on the Chilkoot River just below Chilkoot Lake — both areas near the town of Haines.

Bald eagles come to the area at the confluence of the Tsirku and Chilkat Rivers because of the availability of spawned-out salmon and open waters in late fall and winter. The open water is due to a deep accumulation of gravel and sand that acts as a large water reservoir whose water temperature remains 10 to 20 degrees warmer than the surrounding water temperature. This warmer water seeps into the Chilkat River, keeping a five mile stretch of the river from freezing. In 1982, the 48,000 acre area was designated as the Alaska Chilkat Bald Eagle Preserve.

The weather was cold as expected and varied in precipitation — at times it was heavy rain, blizzard-like snow, or bright sunshine (though low on the horizon, and not as bright as I expected when the sky is clear). The only constant was the temperature, usually in the 20’s to low 30’s F.

My days started in the field before sunrise. I found that early mornings had the most activity. Because of the lack of sun in Alaska, that meant sunrise was at a reasonable hour of 7:45 a.m. (and sunset around 3:45 p.m.). The light for the Chilkat River area was great for morning photography but would progressively get worse in the afternoon when the sun would drop down behind the Takhinsha Mountains. When it did, that would be when I would head over to the Chilkoot River area, just below Chilkoot Lake. There the river valley was pointed in a better direction for late afternoon light.

While on the Chilkoot River I was able to photograph a bald eagle with white wing tips, and white talons. I was later told that it’s unusual, and called leucistic condition.

For the most part, I used my 600mm, occasionally using the 1.4x teleconverter. I would also use the 70-200mm for closer birds or for a wider field of view to give a sense of place. I did use the 600mm for some landscapes of the nearby mountains and was pleased with the results. Alaska is simply beautiful in the winter. At first, I would carry my equipment from the car to shooting area using my Kinesis long lens pack and pack frame, but I found that to be more of a hassle. Instead, I simply hand carried the lens and tripod along with small bag. Because the weather was unpredictable, I would go ahead and put my Think Tank Hydrophobia lens and camera rain cover on the lens. What’s great about the Hydrophobia is you can have on the lens but in a rolled up configuration. This allows you to fully deploy the rain cover in just a few seconds if needed while staying out of the way when it isn’t needed.

I had hoped to also see grizzly bears, but the only sign of them was fresh footprints in the snow each morning (a mom and what appears to be two cubs were hanging out in one of the areas I was photographing along the Chilkat River)

I didn’t camp on this trip. Instead I made the town of Haines as my base. Haines seems like a great small town in a beautiful setting. The B&B that I stayed at was great (The Alaska Guardhouse, which is located on the old Ft. Seward grounds — I highly recommend it). I didn’t eat out much but the few times I did were at the 33-mile Road House (for lunch) on the Haines Highway near the Yukon border. It’s a great middle of nowhere eatery in a log cabin building — perfect for a local Alaskan experience. I also had hamburgers on burger night at the American Legion Hall, and a sit down dinner at the Elks Lodge (the Elks were having a fund-raising auction the night I was there). The scenery in the Haines area is some of the best I’ve seen anywhere with huge snow and glacier covered majestic mountains meeting the sea.

Traveling to and from Alaska was typical for Alaska in the winter. My flight from Seattle to Juneau was somewhat harrowing due to storms that were occurring at the intermediate stops of Ketchikan and Sitka. After the rough landing in Sitka, the flight attendant proclaimed, “If we can find it, we’ll land it.” After finally making it into Juneau, I broke out my serious winter clothes and prepared for the early morning 2.5 hour ferry ride on the Alaska Marine Highway System ship, the FVF Fairweather. The Fairweather is a catamaran-style vessel and one of the newer members of the AMHS fleet. It’s well designed, and equally appointed decorations give it an upscale feeling compared to the older ferry ships. The one thing that I do miss is that on the older ferries, there was more to explore, with multiple decks, a rooftop solarium and other nooks and crannies. Public access on the Fairweather is limited to a single deck, which has an outdoor section on the aft of the vessel and unlike the older vessels does not offer private cabins. In fairness, the Fairweather moves so fast that you really wouldn’t want to be on an open top deck or a deck in the front or need a cabin. Returning from Haines to Juneau, I evidently got one of the last ferries out before a big storm hit the Alaska panhandle. The next day, power went out in Juneau several times, the airport was closed for most of the day, there were mudslides, and in Sitka the airport there was closed because high winds created ocean waves large enough to move boulders onto the runway. When traveling in and out of Juneau, you always want to make sure you have plenty of time on connections. I usually plan on at least an overnight stay to be safe.

So all in all, the trip when well. I also made some new friends with other fellow photographers. Special thanks to photographer John Eppler who graciously gave me lay-of-the-land advice upon my arrival.

In the coming weeks look for additional photos from the trip in my archive galleries.

ABOVE: A bald eagle (Haliaeetus leucocephalus) with white wing tips and white talons flys along the Chilkoot River near Chilkoot Lake State Park in Alaska. The white wing tips and talons are caused by a leucistic condition — a condition of reduced pigmentation resulting in white patches. These patches of white can occur while the rest of the animal is colored normal. Unlike albinism, the eye color is normal. Photographed using a Nikon D3. Image capture: 1/1000 at f4.0, manual exposure, ISO 1600