Protecting people, bald eagles and salmon at the same time isn’t as simple as it might sound.

The Alaska Department of Transportation is proposing to widen and realign a 21.8-mile section of the two-lane Haines Highway (AK 7) near Haines, Alaska and bring the road up to federal highway standards. The department’s goal is to widen the highway, replace the Chilkat River Bridge, help control landslides and bring the speed limit up from 50 to 55 mph by straightening curves, like this curve at mile 17 of the highway (ABOVE). Much of the rural highway travels through the Alaska Chilkat Bald Eagle preserve. Some Haines residents worry about the impact the straightening will have on a 15-mile section of the road through the preserve. Bald eagle perching and roosting trees, wetlands and salmon spawning habitat and cultural sites could potentially be affected. The straightening of the curve shown is one of the curves which would require significant work including wetland mitigation and stream relocation. 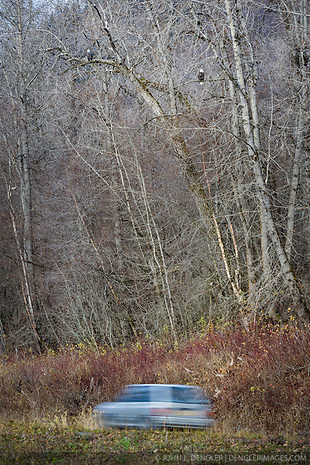 Due to 250 comments received about the project from Chilkat Valley residents, and an unfavorable review from the National Marine Fisheries Service, the environmental assessment plan for project is being revised.

The state estimates that 584 people use the highway daily. During an 80 minute period during the mid-afternoon, this photographer photographed vehicles traveling through the curve at 17 mile. Most of the approximately 42 vehicles were the only vehicles on the road at the remote curve. However, there were several instances when more than one vehicle passed each other as they went south towards Haines, or north towards the nearby Canadian border (as seen in this photo).

The Alaska Chilkat Bald Eagle Preserve is the location of one of the largest gatherings of bald eagles in the world each fall. The 48,000 acre area was designated as a preserve in 1982. The Haines Highway is the only road access to Haines. The 152 mile highway travels from Haines, Alaska to Haines Junction, Yukon in Canada where it connects with the Alaska Highway and continental highway system.

RIGHT: Bald eagles perch in trees next to the Haines Highway at 20.7 mile near the parking lot pullout for the Alaska Chilkat Bald Eagle Preserve. Proposed roadwork in the area shown in this photo is less extensive than in nearby areas not shown. To license an image, click image.