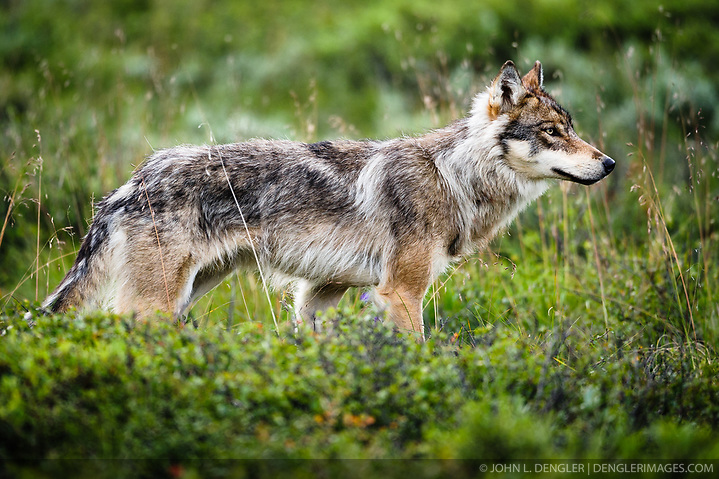 I first photographed the Grant Creek wolf pack of Denali National Park and Preserve in the summer of 2004. This first sighting was truly a special moment; I caught a glimpse of the alpha male tending the pups while his mate was foraging for ground squirrels to feed the pups. Over the years, I and countless other park visitors would see the Grant Creek pack as the pack’s home range included the park road that bisects much of the vast six million acre park. Often visible from the road, the pack has been described as one of the most visible and photographed group of wild wolves in the history of Denali National Park, and possibly the world.

So it was a sad day when I read a Los Angeles Times story by Kim Murphy that the main breeding female wolf was killed within a mile outside of the park boundaries. According to the story a trapper shot an aging horse near its death and used it as bait to lure and fatally snare the female radio-collared wolf and another male wolf. It is unknown if the male wolf was part of the Grant Creek wolf pack. The wolf kills were within a former no-wolf-killing zone that had been established by the Alaska Department of Fish and Game because it was surrounded by park land on three sides. In 2010, the regulation expired and the board of the department declined to retain the special area designation.

What makes the loss of this female troubling is that the female wolf was believed to be the only remaining primary breeding female wolf in the Grant Creek pack. Earlier this spring, the only other primary breeding female of the pack was found dead of natural causes within park boundaries. According to the Los Angeles Times story, biologists who study the Grant Creek wolf pack in Denali National Park and Preserve now fear that without these breeding females producing new pups, the pack will collapse. 2105 UPDATE: The Grant Creek wolf pack has dispersed and no longer exists.

The number of wolves within the park is declining. According to the Denali National Park and Preserve website, “For the last 20 years, park-wide wolf numbers (north of the Alaska Range) have averaged about 100 wolves. However, in April 2009, there were approximately 65 wolves in the packs being regularly monitored by park biologists – the lowest number of wolves recorded in Denali since biologists began monitoring wolves with methods that give reliable counts.” 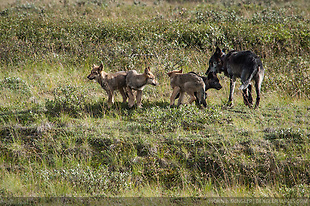 As the reader comments to the Los Angles Times article on the incident published on the Anchorage Daily News website reveal, the issue of establishing a no-wolf-killing zone is controversial among Alaskans. Many feel that had this buffer zone been in place (as it once was), the wolves would not have been killed by trapping. Conversely, many in the hunting and trapping community feel they have the right to hunt wolves on state land adjacent to the park’s boundaries. In a Los Angeles Times follow up story by Kim Murphy the trapper involved scoffed at the idea of a buffer zone.

Regardless of future decisions concerning the issue, visitors to Denali National Park may see less and less of the famous Grant Creek wolf pack and if the predicted breakup occurs, sightings of the the pack will be nothing more than a memory and tale told by park tour bus drivers as they pass through the pack’s former home range. 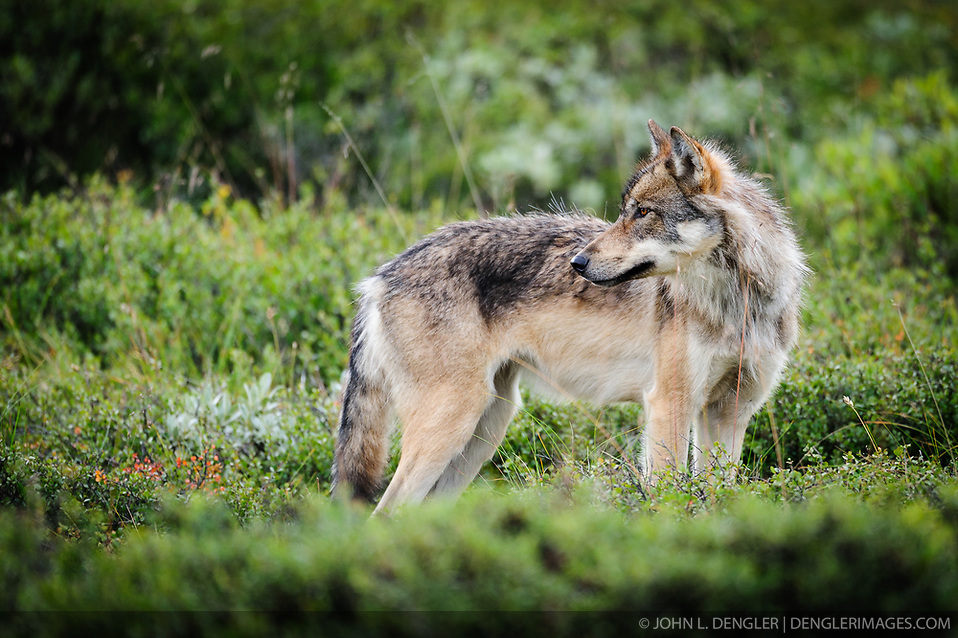 TOP and BOTTOM: An adult member of the Grant Creek wolf pack looks at other adult members of the pack as the pack was traveling near Stony Creek in Denali National Park and Preserve in Alaska.

MIDDLE: The alpha male wolf of the Grant Creek gray wolf pack keeps watch on his six pups near Stony Creek in Denali National Park and Preserve. This photo was taken on July 31, 2004.