UPDATE: On August 31, 2015, President Obama put the issue to rest and changed Mt. McKinley to Denali.

Yesterday’s news that Alaska Republican U.S. Sens. Lisa Murkowski and Dan Sullivan are making the annual introduction of a bill to officially rename 20,310-foot Mt. McKinley to it’s original historical Athabaskan name, Denali (the Great One or the High One), reminded me of how privileged and lucky I have been to have seen and photograph the mountain. If you ever are lucky enough to see Denali, I think you will understand why I side with Alaskans on this issue. Words and pictures can never describe the view. There literally isn’t a mountain visually taller on the planet. Even though Mt. Everest is higher, Denali’s 18,000-foot change in elevation from it’s base in the lowlands to it’s peak is more than Mt. Everest (only a 12,000-foot change).

I’ll never forget the first time I saw Denali, North America’s tallest peak, on our first visit to Wonder Lake, located deep in Denali National Park and Preserve. After a 6-hour, 84-mile bus ride in a modified school bus, we arrived at Wonder Lake in light rain. Denali is only 25 miles away from Wonder Lake but it was totally obscured by clouds. Not seeing the mountain for weeks, or even a month at a time, isn’t unusual. A visitor has a 33-percent chance of seeing the mountain with clear skies. The odds of a partial view aren’t much better at 40-percent. The park rangers at the Eielson Visitor Center, the closest park visitor center to the peak in the park, keep a calendar in which they hand draw what the peak looked like on a particular day. Most of the drawings are gray clouds. 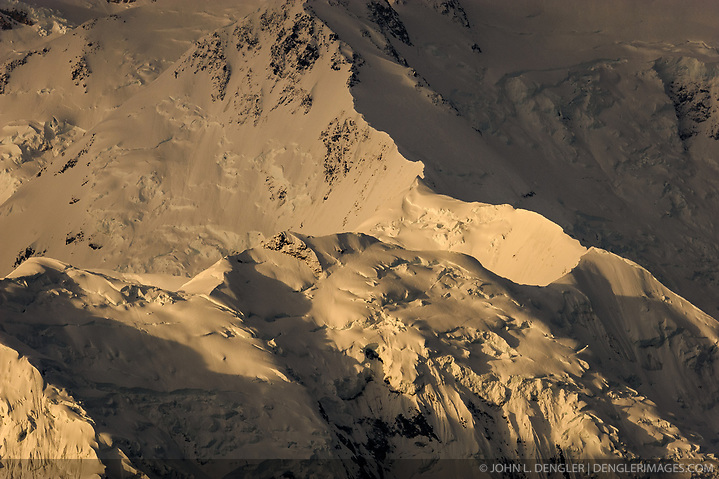 Denali basks in morning light at sunrise in Denali National Park and Preserve. This view is a small detail from the north slopes of the mountain seen from Wonder Lake.

So you can imagine we were dang excited when later that evening we saw a sliver of the mountain in the still heavily overcast skies. Impressed, I took a few photos and went to bed. Then in the early dawn at roughly 4 a.m., Carol shook me telling me I had to immediately get up and look outside the tent. My jaw dropped. The sliver of the mountain that we had seen the night before, was only the foothills of the peak. Those mountains looked like the familiar mountains of the Front Range in Colorado. Towering above them was the icy granite massif, Denali. Even at a distance of 26 miles away we had to tilt our heads upward to take in the mountain. Next to seeing the Aurora borealis, it is probably the most spectacular thing I have seen.

I hope that anyone who makes the effort to Denali National Park gets a chance to see the mountain. Here are some tips that might increase your chances. First, the Wonder Lake campground is the closest you can get to the mountain on land without serious backpacking across the dangerous swift moving McKinley River. It is a great backcountry campground located in a wet boggy area and is one of the most mosquito infested places I have been. Only camping in the Everglades in the summer was worse. You won’t think anything of the cold, rainy, and fierce mosquitos if you get to see the mountain. If you don’t see the mountain, you might curse me for ever putting the thought of seeing the mountain in your head. To increase your chances, you’ll want to stay multiple days at Wonder Lake. I usually try to stay 4 – 6 days, using Wonder Lake as a base to day hike from. The park’s shuttle bus makes it easy to day hike in other areas of the park once you have explored the Wonder Lake area on foot. The final tip I would give is to get up early. It has been my experience that Denali is often visible in the very early morning hours. Don’t hit the snooze alarm though. More often than not it might only stay completely clear for 20 minutes. The mountain creates its own weather and it changes quickly.

Denali teased me in my failed attempt take this time-lapse movie of the clouds swirling around the peak overnight. I hoped that it would eventually clear in this view from Wonder Lake. No such luck.

There is no question that Denali has been over-photographed by professional and amateur photographers. That still doesn’t deter me from trying. Just the exercise of putting in extra effort to simply see the mountain makes it worthwhile. Frankly, in many ways, trying to photograph the mountain is futile. Seeing Denali is one of those things you have to see in person. A photograph will never capture the immensity and majesty that you experience in person.

So as the Alaska delegation tries again after four and a half decades of previous attempts to get the mountain renamed, I’m hoping that this time they succeed and defeat the Ohio delegation’s (President William McKinley was from Ohio) attempts to block the name change to Denali, the name it was for thousands of years before a gold prospector called the mountain McKinley.

ABOVE: Sun rises on Denali and the Alaska Range as seen from Wonder Lake in Denali National Park and Preserve. Also pictured is the setting moon, above Denali. Other mountain peaks pictured include: Mount Brooks, Mount Silverthrone, Mount Tatum, Mount Carpe and Mount Foraker. EDITORS NOTE: This image is a panorama composite consisting of multiple overlapping images stitched together.

TOP OF PAGE: Sun rises on Denali and the Alaska Range as seen from Wonder Lake in Denali National Park and Preserve. EDITORS NOTE: This image is a panorama composite consisting of multiple overlapping images stitched together.