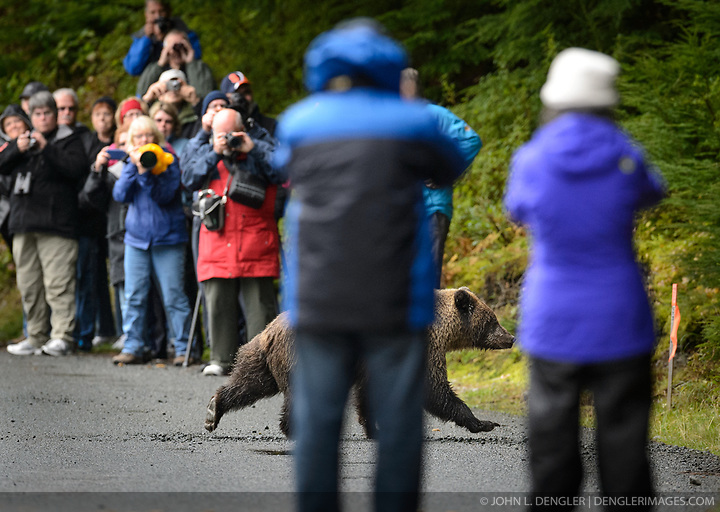 I was dismayed but not surprised to hear about the recent bad behavior by visitors to the Chilkoot River corridor near Haines, Alaska.

The narrow mile-long river and road corridor between scenic Chilkoot Lake and the ocean is a popular destination for the 80,000 tourists and sportfishing anglers who visit each year. It’s also popular with hungry grizzly bears who come to the river to feast on the easily accessible salmon.

This mix of people and bears in the confined corridor is a recipe for serious, and potentially dangerous problems.

During peak times, bus loads of tourists from cruise ships, park visitors, and wildlife photographers come to the easily accessed Chilkoot Lake State Recreation Site to see grizzly bears. Unfortunately some tourists and photographers crowd the bears to the point of almost surrounding them in their attempt to get a close-up photo.

Additionally, some fishers are sloppy in keeping their coolers, food, beverages, and fishing equipment out of reach of bears. I would have thought everyone knew that human food and bears is a no-no. 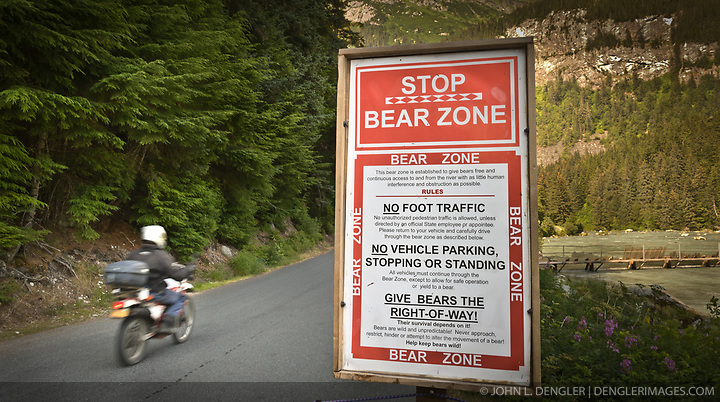 Cars often stop in the “no-stopping zone” that is set up to allow bears a token travel zone free of humans to travel to and from the river. The narrow road has few pullouts for tourists and fishers, causing traffic and congestion.

I don’t know which of the above human transgressions is worse. I do know any of them are bad news for bears, should the bear harm a human. I often hear people say that this is a “bear-management” issue but in reality it is “human-management” issue. The bears are only doing what they have done for centuries. In my opinion, perhaps the humans are the ones needing “managing.”

Last month a new height of absurdity took place on the Chilkoot River when a man dressed up in a realistic bear costume. He approached and harassed a sow and her cubs by jumping up and down and waving his arms, supposedly getting within 10 feet of the cubs. While the incident might sound like a goofy YouTube video, there is no humor in this. A mother bear will do anything, and I mean anything, if she senses her cubs are in danger. The stunt placed the bear-costumed man in danger and the lives of anyone close by. During the summer and fall bears are on a mission. They have a limited amount of time to eat enough to make it through winter hibernation. Expending extra energy to deal with non-essential activities is a real threat to their survival. It’s not a laughing matter. Alaska State Troopers are investigating the incident.

I recall the first time I went to the Chilkoot River; specifically to photograph bears. It was summer, during one of the salmon runs — lots of people fishing and hoards tourists. It was crazy. Traffic was backed up on the narrow two-lane road, scared bears were trying to find a way back to the woods, people were running with a bears in the vicinity, dogs were off leash. I was dumbstruck.

In the past the state has hired “bear monitors” (I think they should be called “people monitors”) to help educate Chilkoot River visitors on the “do’s and don’t’s” of being around grizzlies. Unfortunately state budget cutbacks have eliminated those positions. Local bear conservation groups like the Alaska Chilkoot Bear Foundation and the Great Bear Foundation work hard to educate people on the role of bears, their importance, and how bears and humans can maintain a healthy, workable relationship. But those efforts can only go so far, these volunteers lack the authority to issue tickets or fines.

Next summer, the state plans to start construction of bear-viewing platform, and make road improvements to improve parking and the flow of cars on the narrow road. Some local residents however are skeptical that even these actions will improve the situation. There is not a simple solution.  Mixed use areas are complex to manage and the solutions are unique. This area is unlike other popular accessible bear viewing locations in Alaska. The challenge centers on the fact that the area is trying to be too many things, to too many different types of users. 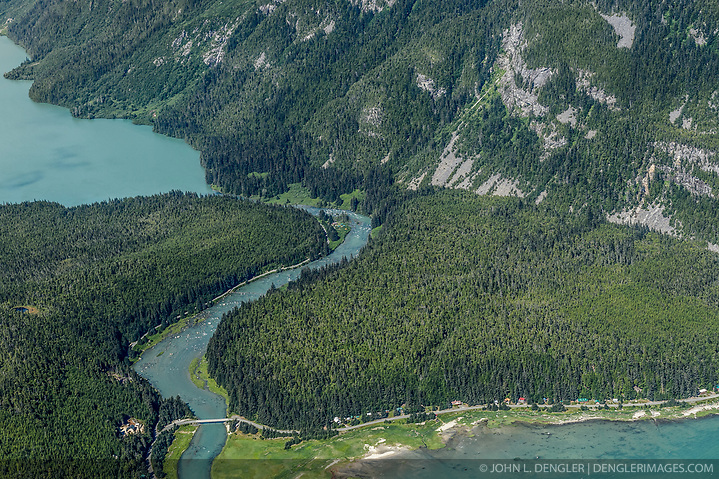 The image above shows the narrow corridor of the Chilkoot River as it runs from Chilkoot Lake (upper left) to the ocean at Lutak Inlet (bottom). The narrow two-lane road is visible on the left side of the river.

Do I think people should be discouraged from going here? Absolutely not. The Chilkoot River corridor is beautiful, has amazing fishing and wildlife viewing opportunities (bald eagles also frequent the area, particularly in the fall). But I would caution visitors to be smart, respect the wildlife, and to do no harm to the wildlife either intentionally or unintentionally. Remember wildlife is just that, WILD. These aren’t the critters that you pet at an animal farm or petting zoo. Don’t even think that you can pose for a “selfie” with these bears. Recent headlines from Yellowstone National Park have touted that tourists haven’t had much luck taking selfies with the bison there. Getting gored by a bison is bad, being attacked by an adult grizzly is equally terrifying and deadly. 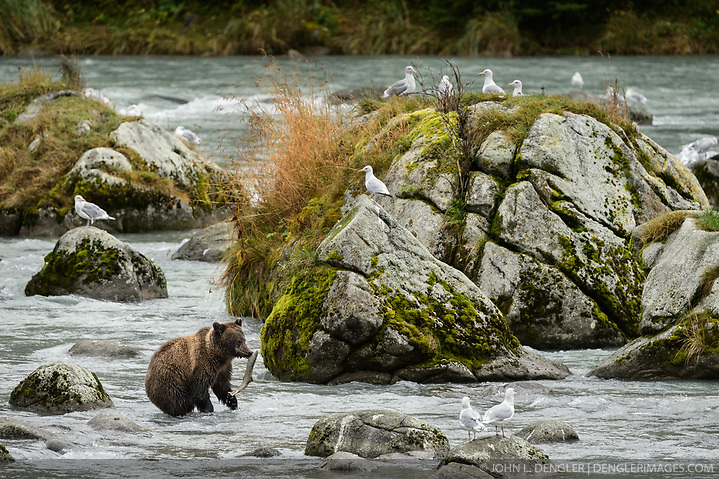 If you visit during the off season, you might have the Chilkoot River corridor to yourself. If you are lucky enough to experience that, it will be a treasured memory. That was my experience the last time I visited the Chilkoot River. Technically, I was with another person, but the entire stretch of the river was devoid of humans. We were talking, well away from the human-free bear travel zone, watching eagles on the river when out of the corner of my eye I noticed a grizzly bear poke its face out of the shadows of the woods directly behind us. The grizzly then proceeded to walk past us by about 15 feet. While it was a close encounter that I will never forget, I was troubled. Bears are by nature scared of humans. They really don’t want to have anything to do with us. The fact that this bear chose, on his own, to travel within 15 feet of us is, in my opinion, indicative of a serious problem. 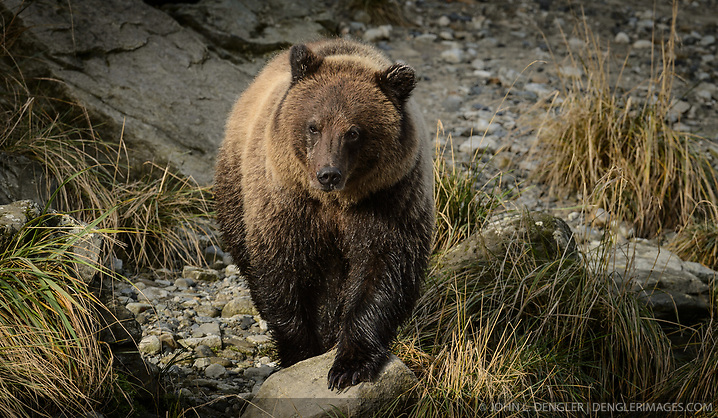 ABOVE: While the grizzly bear appears to be walking next to me, in reality that is not the case. I took this photo from a bridge. Because I was on the bridge, the bear was able to move freely. The use of a long 600mm lens made the bear seem much closer than it was. I normally prefer to photograph wildlife in situations away from tourists and other photographers. But when I do photograph in these situations, I make sure I give wildlife the space it needs. Just because you see a hoard of other folks engulfing a bear, doesn’t mean that it is ok for you to join the scrum.